"Somewhere Nowhere" is inspired by the vacant airports during the COVID-19 pandemic, when lovers and families became separated and estranged. As national and regional borders closed one by one, plans and promises were broken. In the critical situation, we saw the frailty of contemporary existence, the inherent flaws of technocapitalism, and our longing for others. 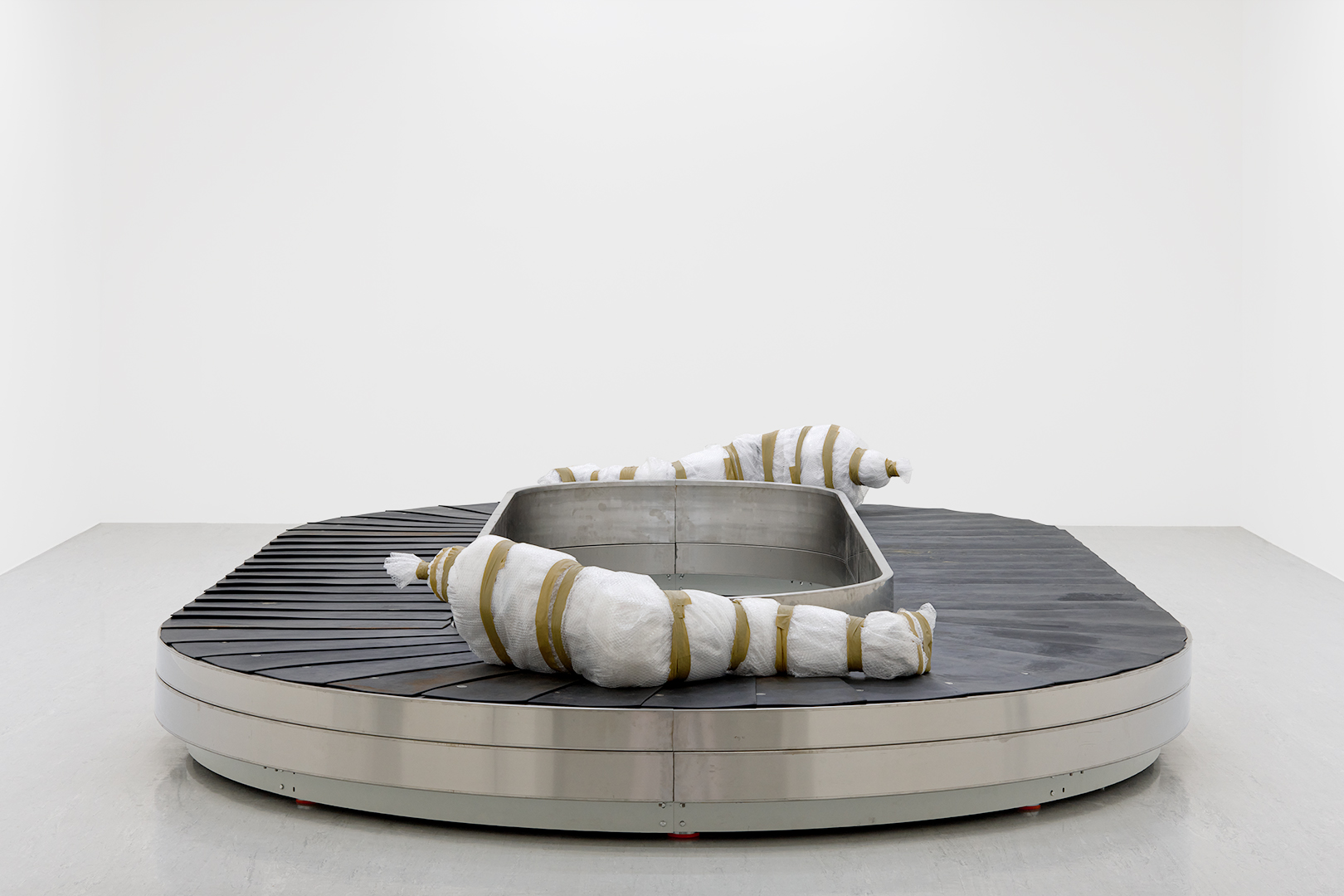 The work is inspired by an incident of real-life violence. In “Batting Average of a Dick,” two robotic arms holding baseball bats repeatedly strike the punching bag on the red carpet. The scene manifests danger and absurdity. The punching bag is a symbol of masculinity, but it lays tragically on the ground and endures punishment repetitively. The work is an endless cycle of violence, it offers no explanation or resolution. When facing life’s ridiculousness at times, one can only hopelessly accept it as it unfolds, and in acceptance there exists the cruel humor of the civilized world. 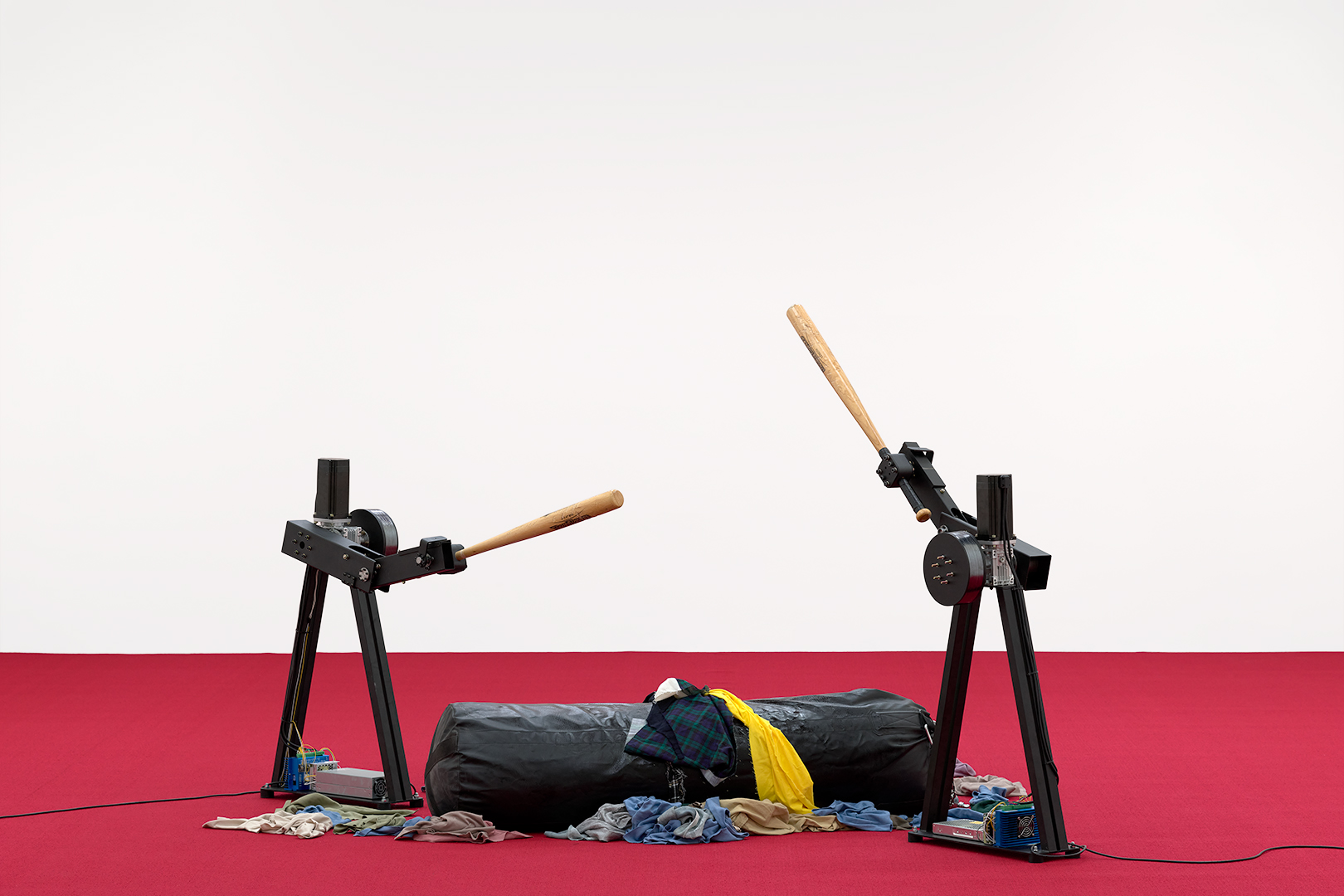 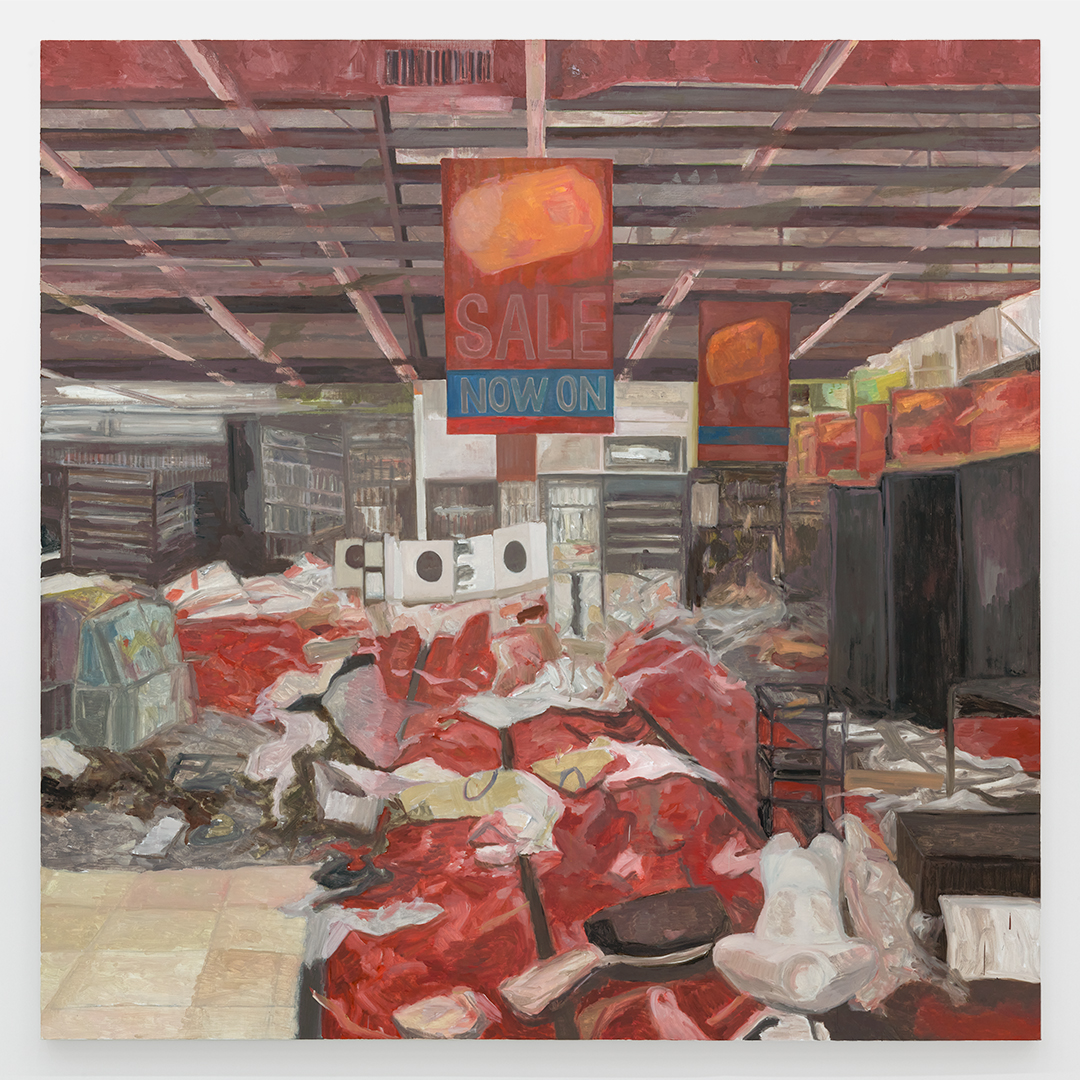 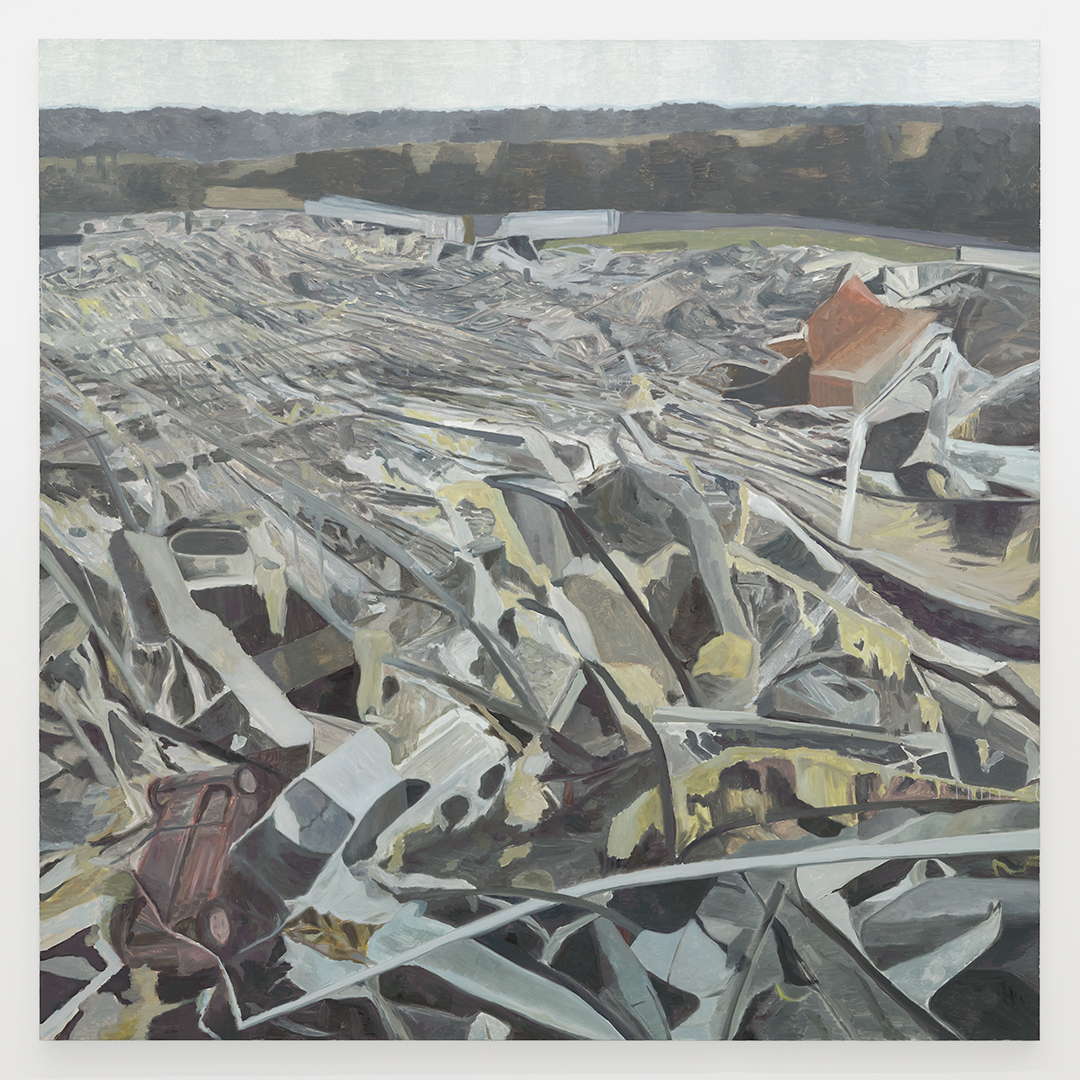 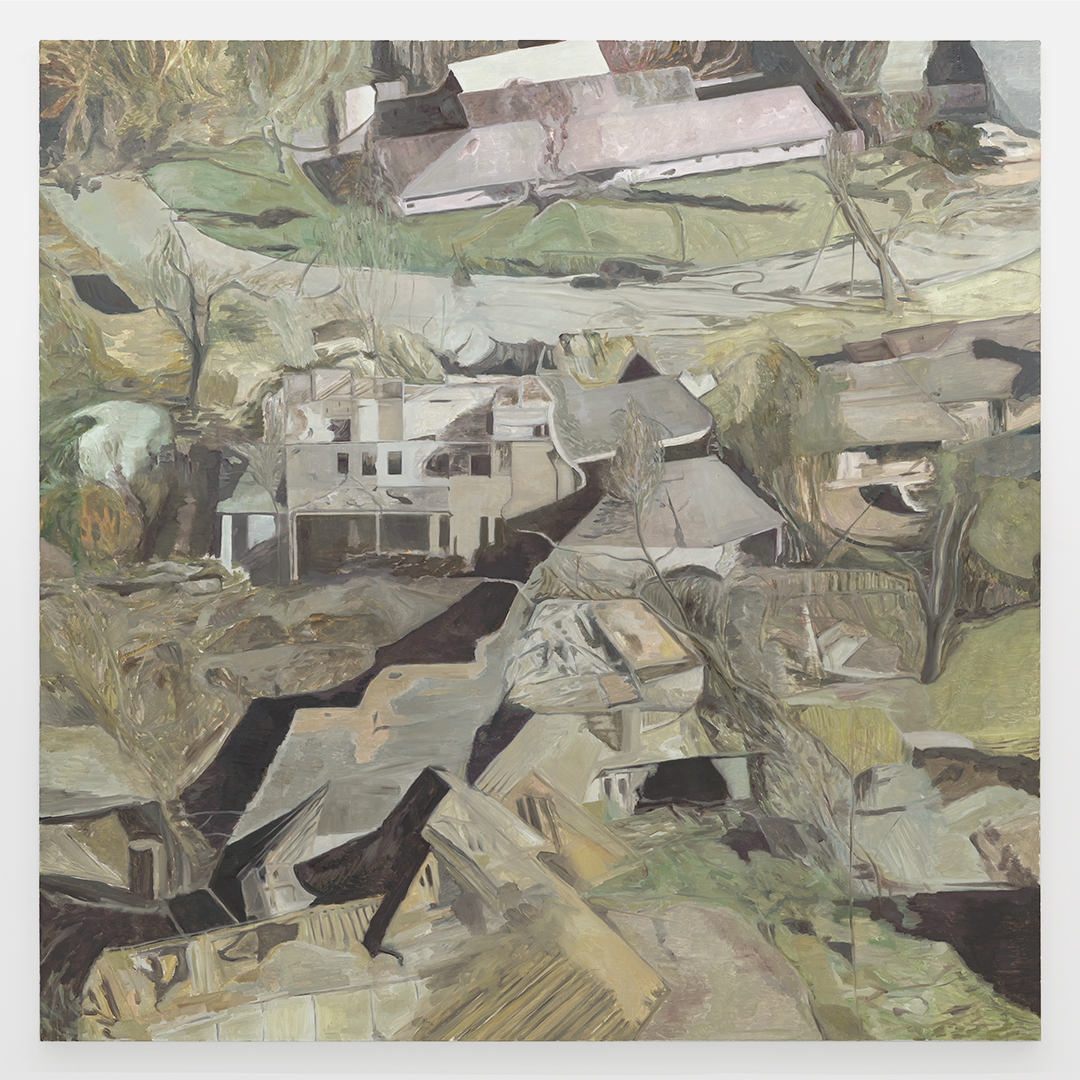 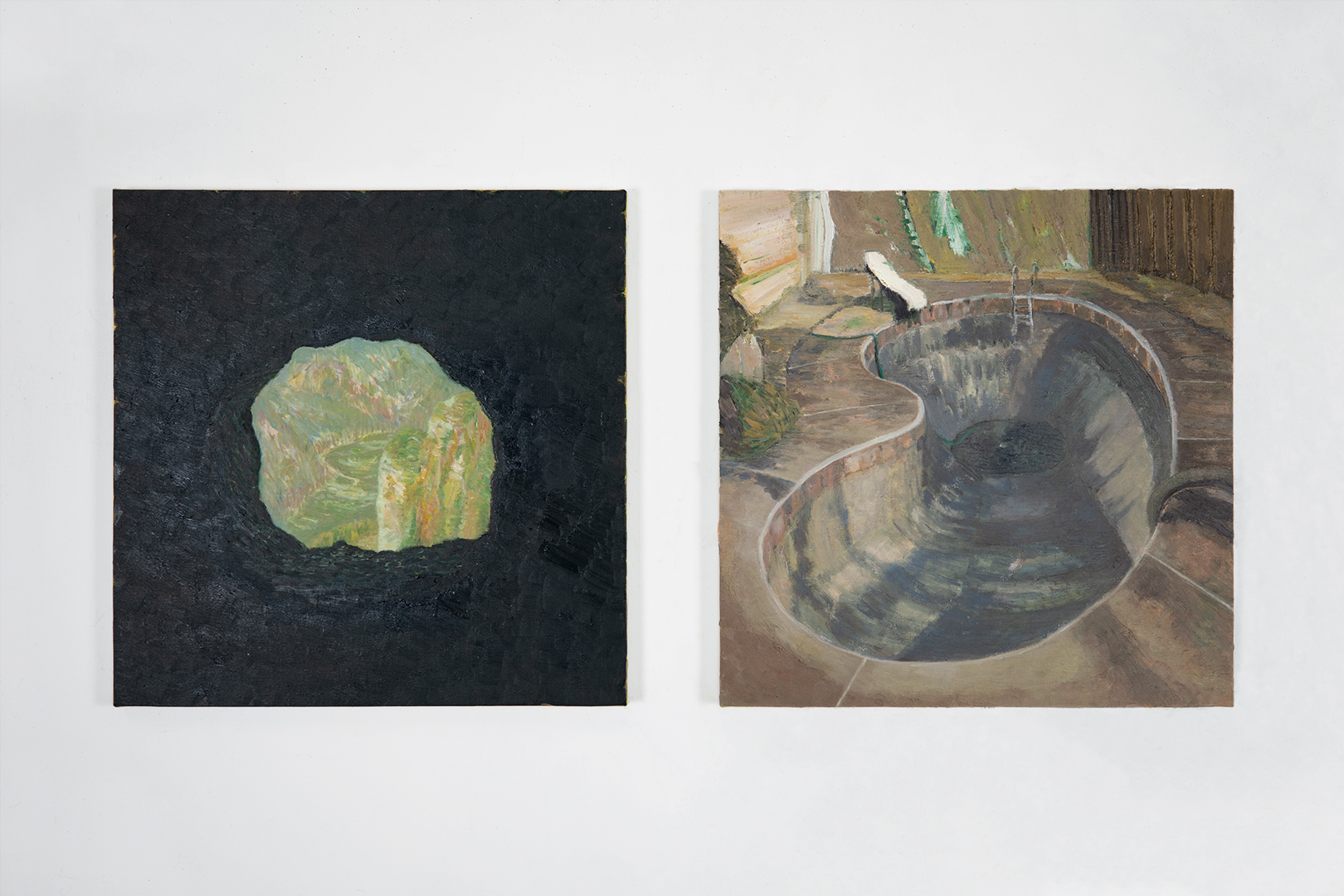 “Cavities” is a painting series that originated during the COVID-19 quarantine in 2020, it comprises pairs of scenes devoid of human presence. The word “cavity” denotes an empty space within an object or a compartment of an animal body. Instantiating the concept, the pool is intentionally rendered with a hint of flesh tone to enhance the double meaning. The pool is a symbol of leisure and family activities, it is meant to hold bodies with buoyancy, however, a drained pool embodies a passing memory - an emotional hole. The pool is a relic of wealth, its emptiness resembles a capitalist ruin, where a force majeure disposes of the rich and the poor equally. 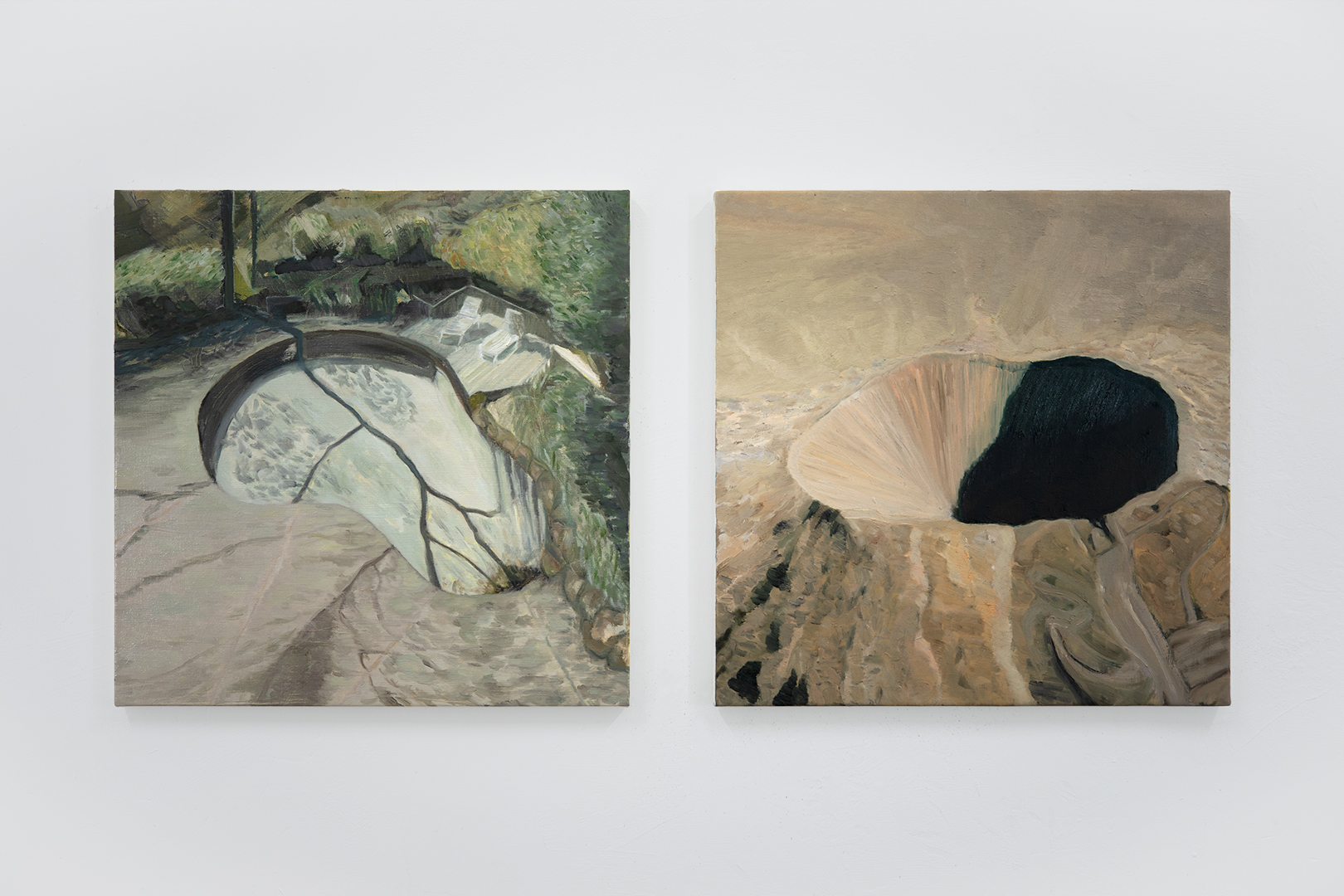 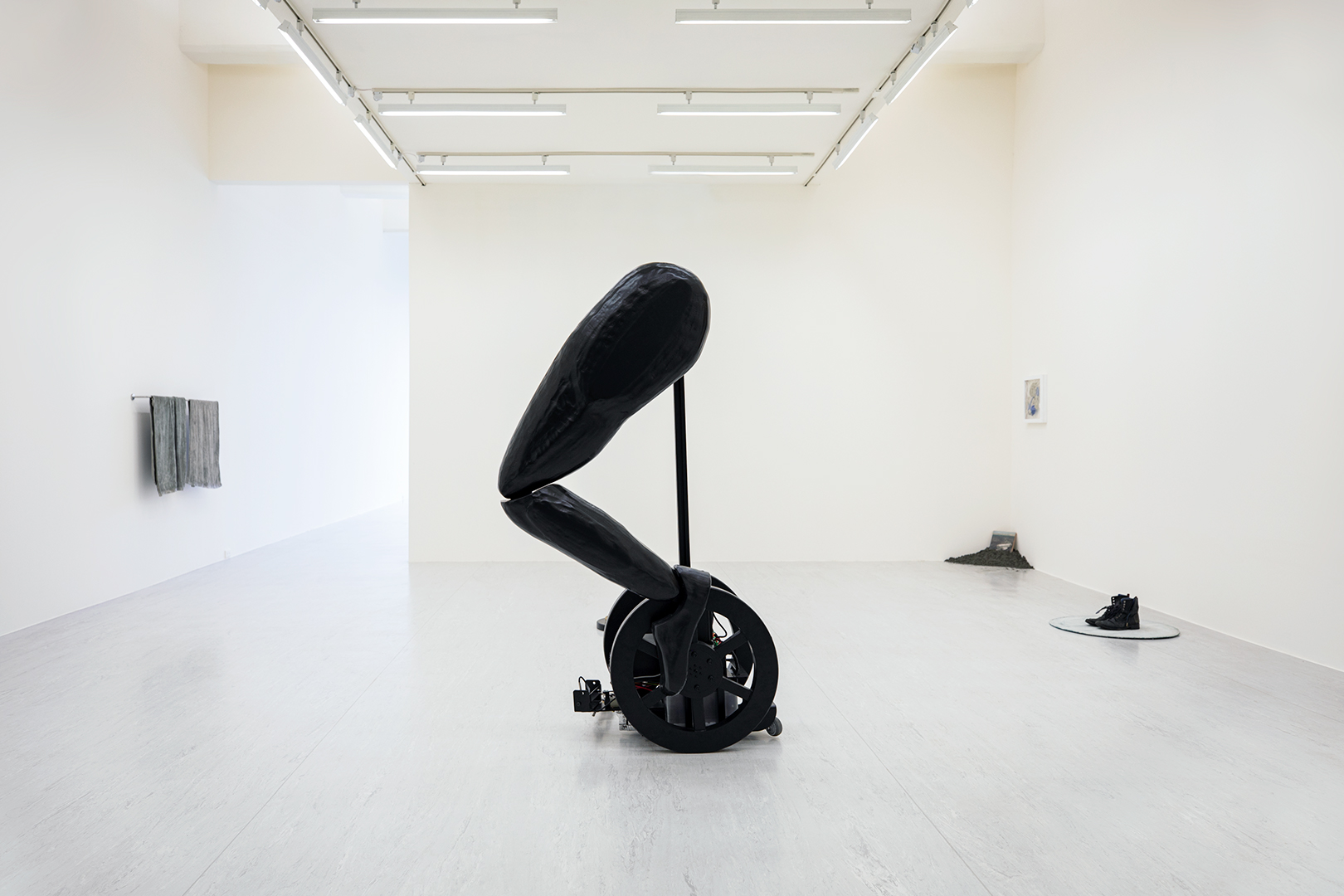 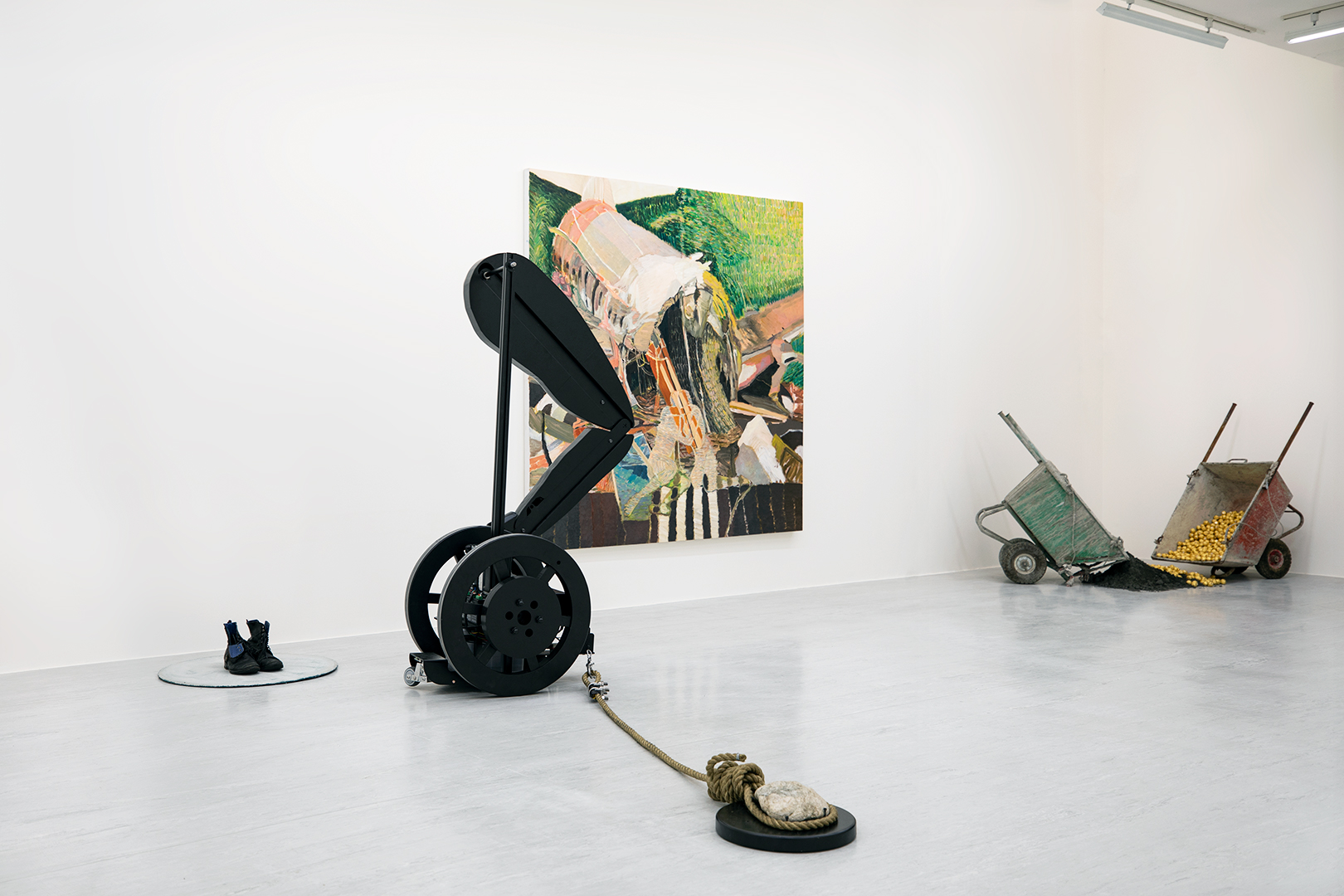 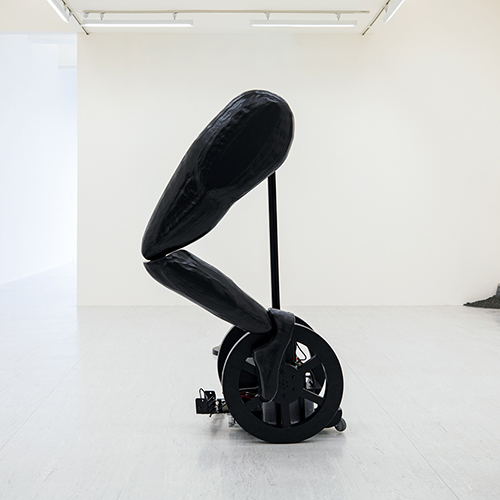 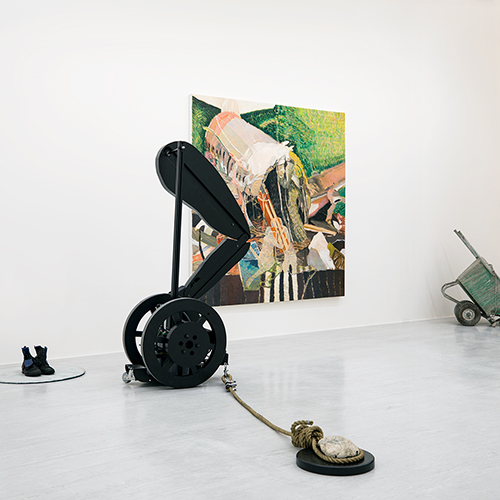 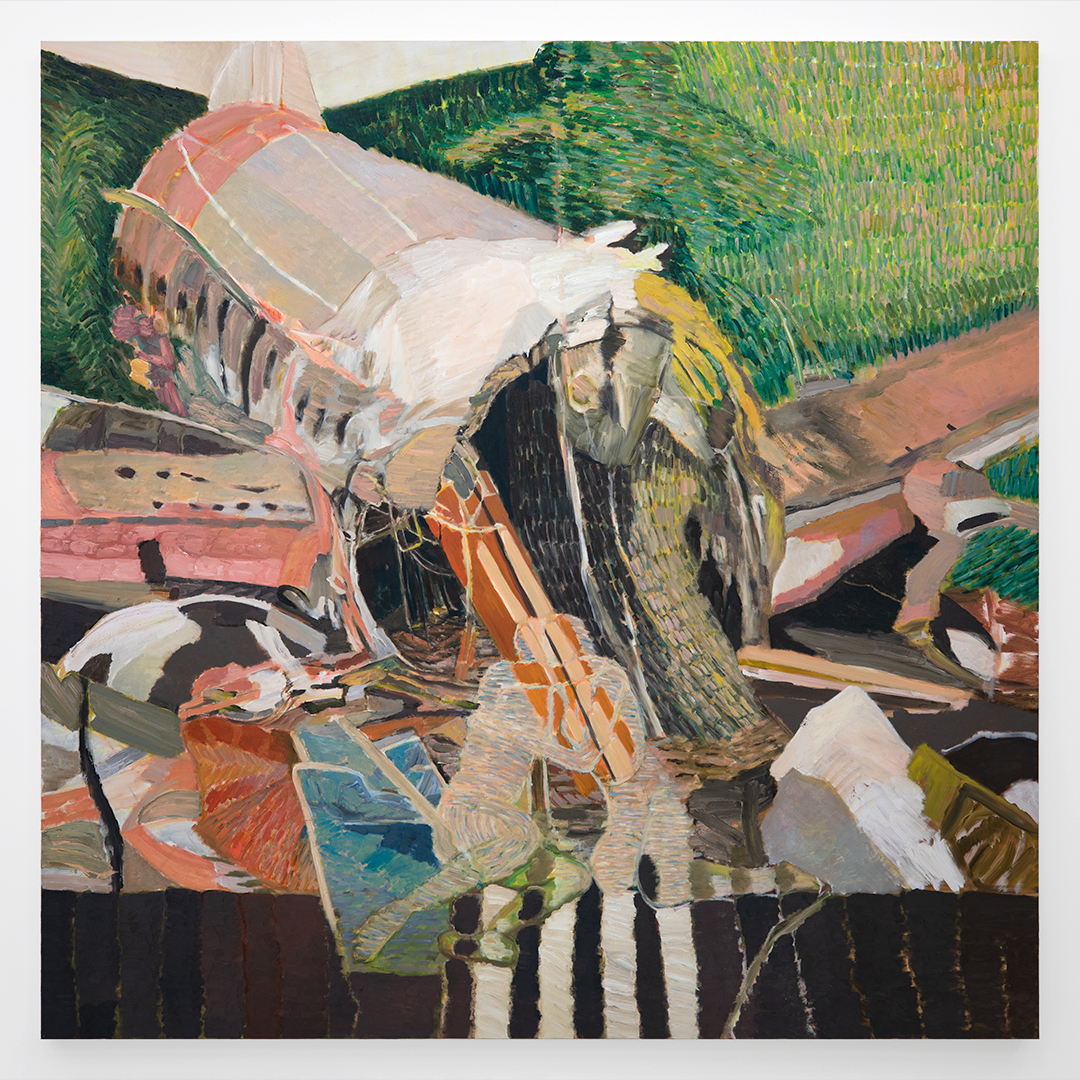 After Us2020200 x 200 x 5 cmOil on canvas
Above a King, Beneath a Thing2020InstallationDimensions variableWood, rubber, steel, aluminum, paint, rope, stone, electronics

The work draws inspiration from two sources: “robota,” the Czech origin of the word “robot” and Sisyphus, who is condemned to push a boulder up a hill for eternity in Greek mythology. “Robota” translates to forced labor, just like Sisyphus who pushes the boulder up only for it to roll back down again. The work is an absurd comic about the repetitive daily routines that we perform, but it also asks serious questions about contemporary servitude in a capitalist society. With technological advancements and a widening wealth inequality, are we moving toward a better future? 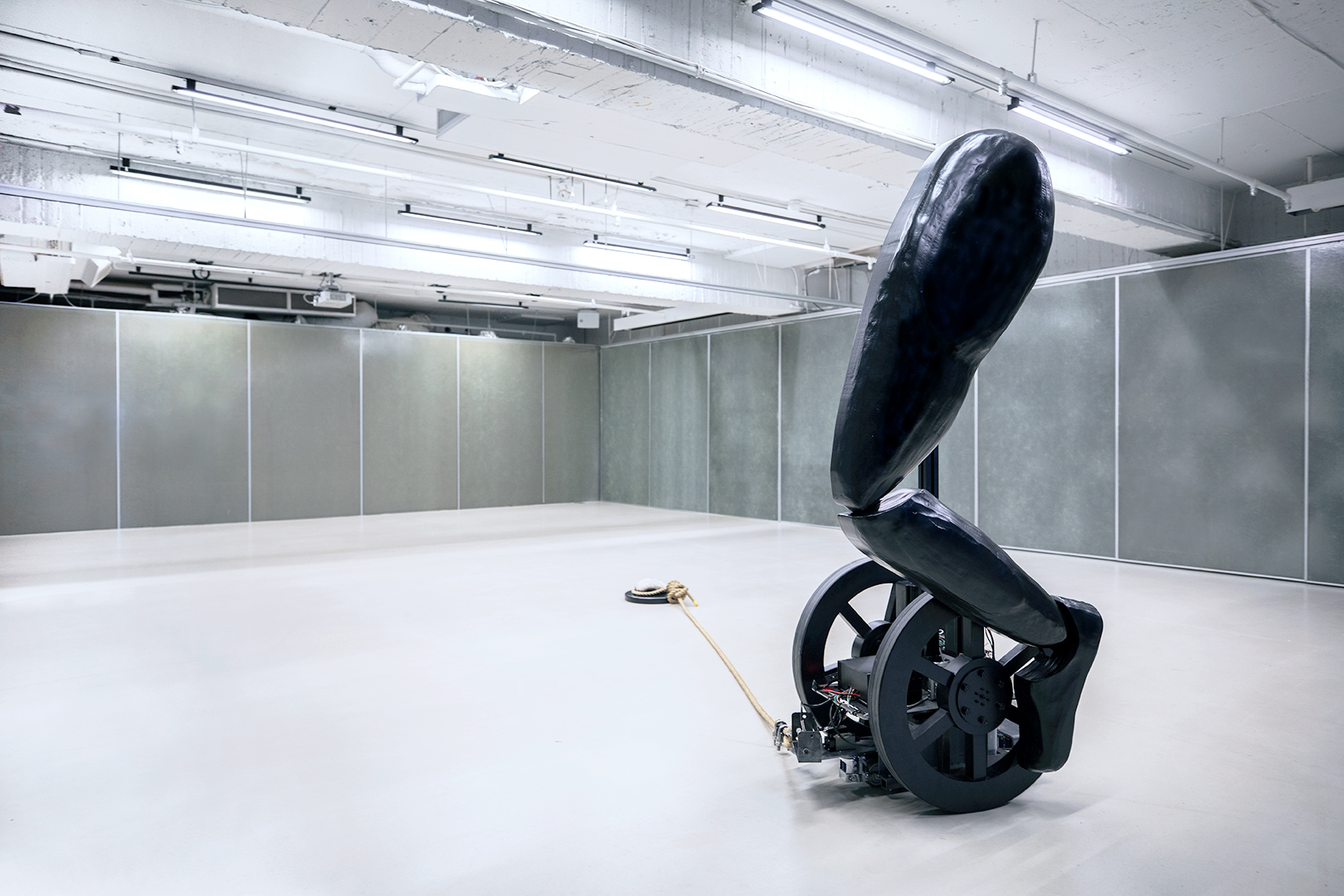 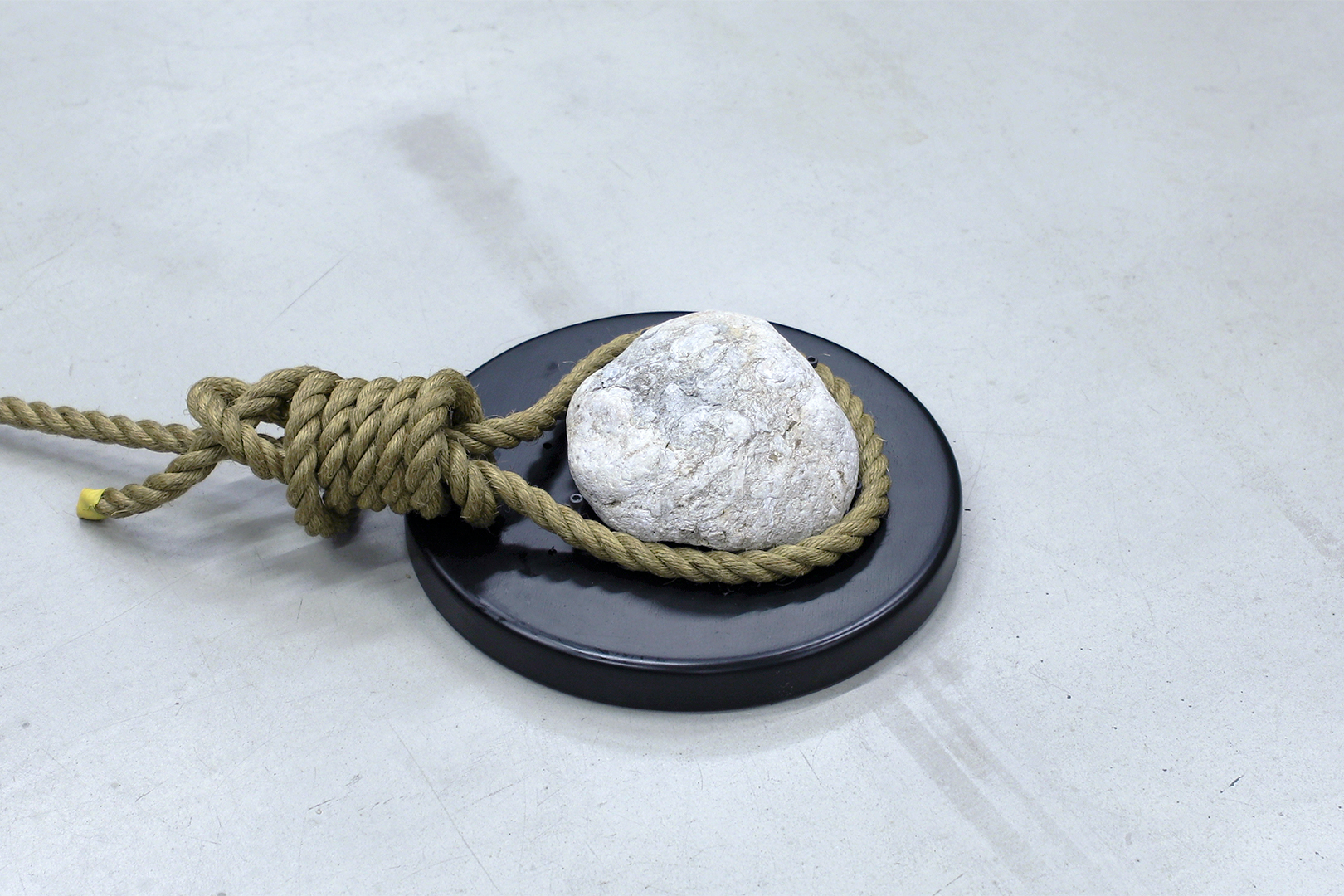 “90x200” is an installation that dramatizes the emotions of frustration, anxiety, and delirium through mechanical movements. It stages the internal state of push-and-pull with a ghostly body accompanied by repetitive machine noises, signaling a symbolic sickness of contemporary living by automation. The title “90x200” not only describes the dimensions of a single bed, but also evokes the idea of pixelation. The work plays out as a crude mechanical resolution, pointing to a possible future in which the human body disappears while machinery performs the lingering visceral and psychological residues. 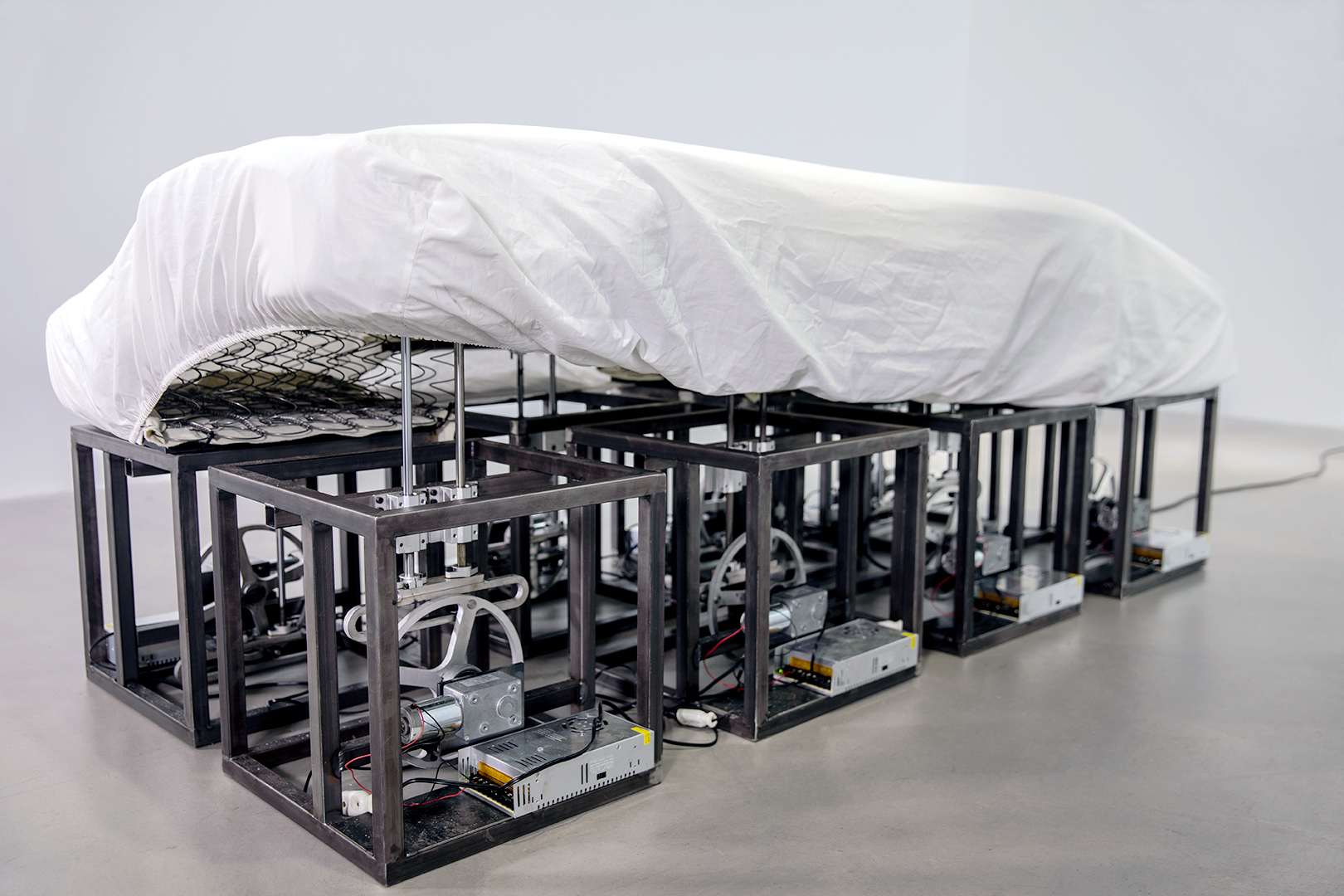 Two rectangular mini fridges glow in the dark, each with a small robot inside acting on a piece of raw meat. The robots seem to be attempting to communicate by pushing the meat back together. The work provokes a mixed sense of sympathy, disgust, affection, absurdity, powerlessness, humor, and eeriness. Inspired by our primal need to connect with one another, “Meet Apart” presents animalistic desires against modular machine logic. The work is a comic metaphor to our intimate tendencies as lovers, brothers, neighbors, friends, and lonely strangers. 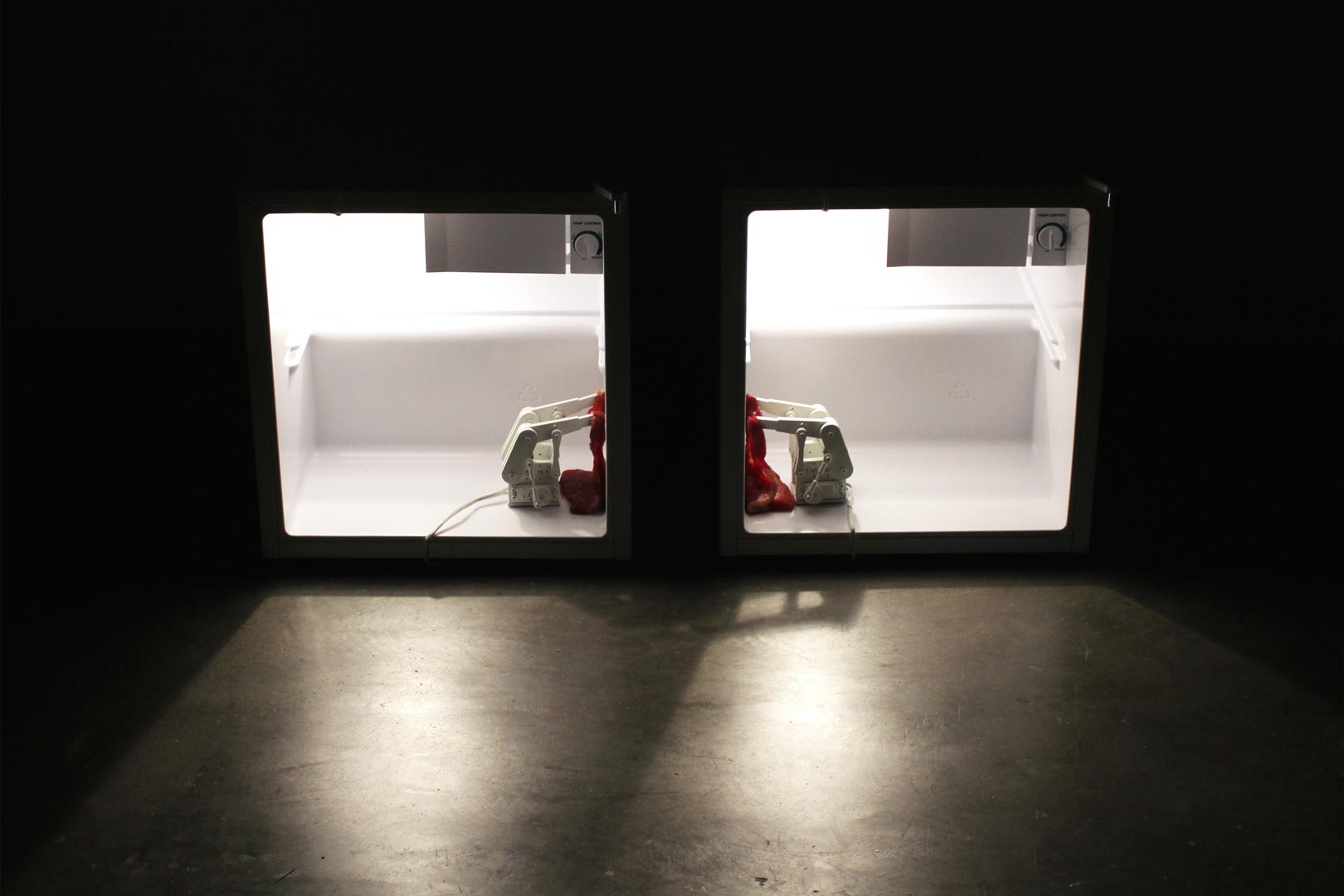 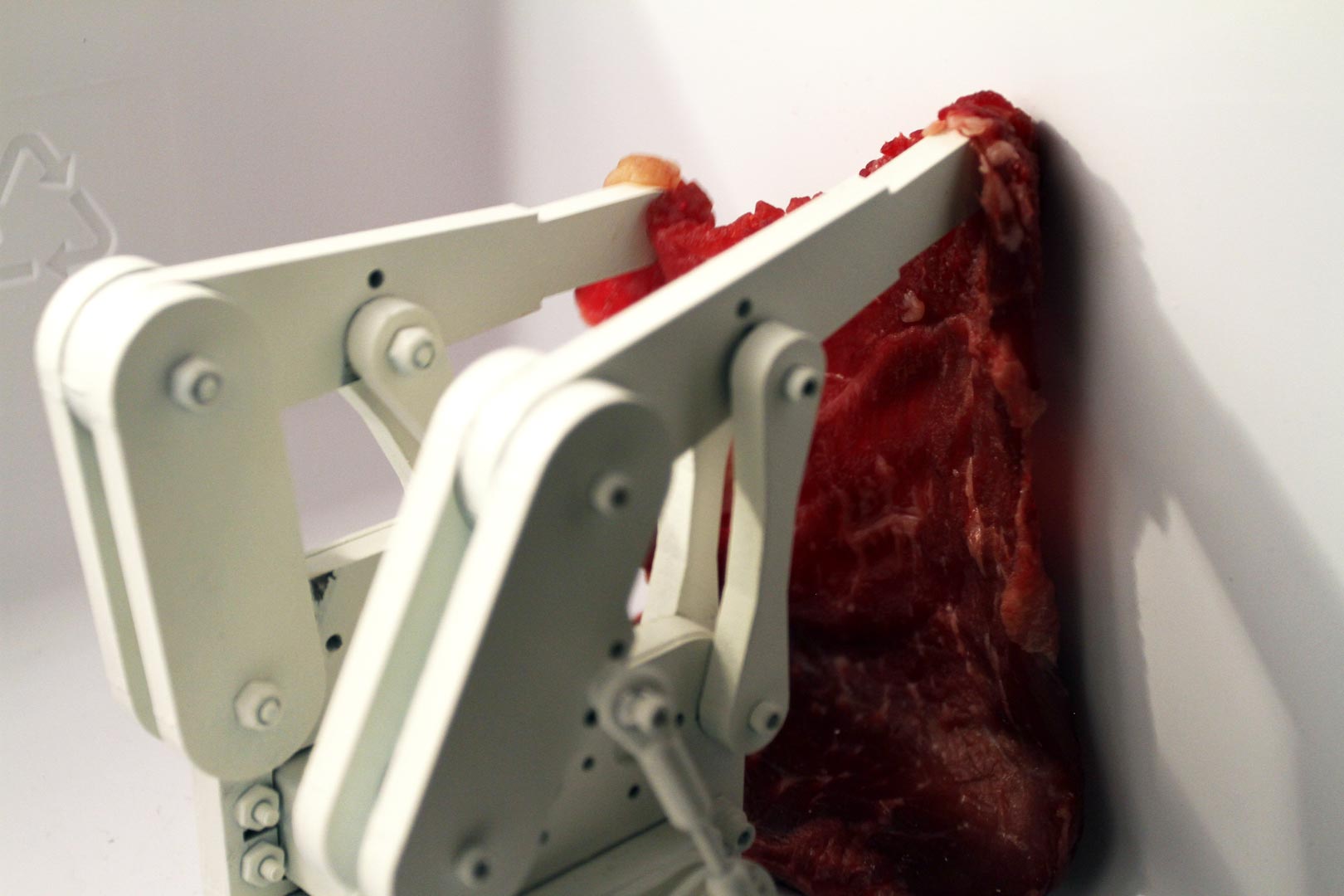 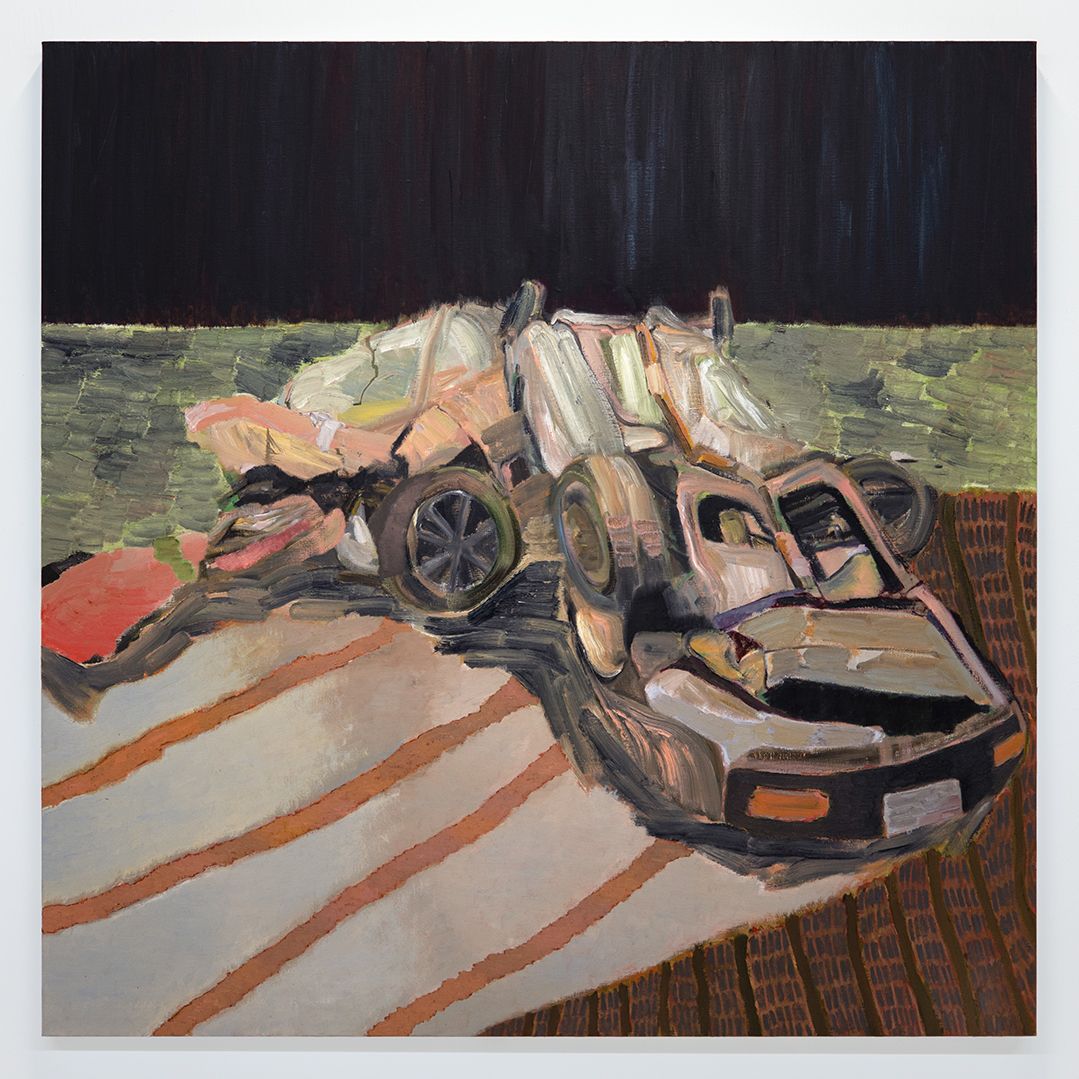 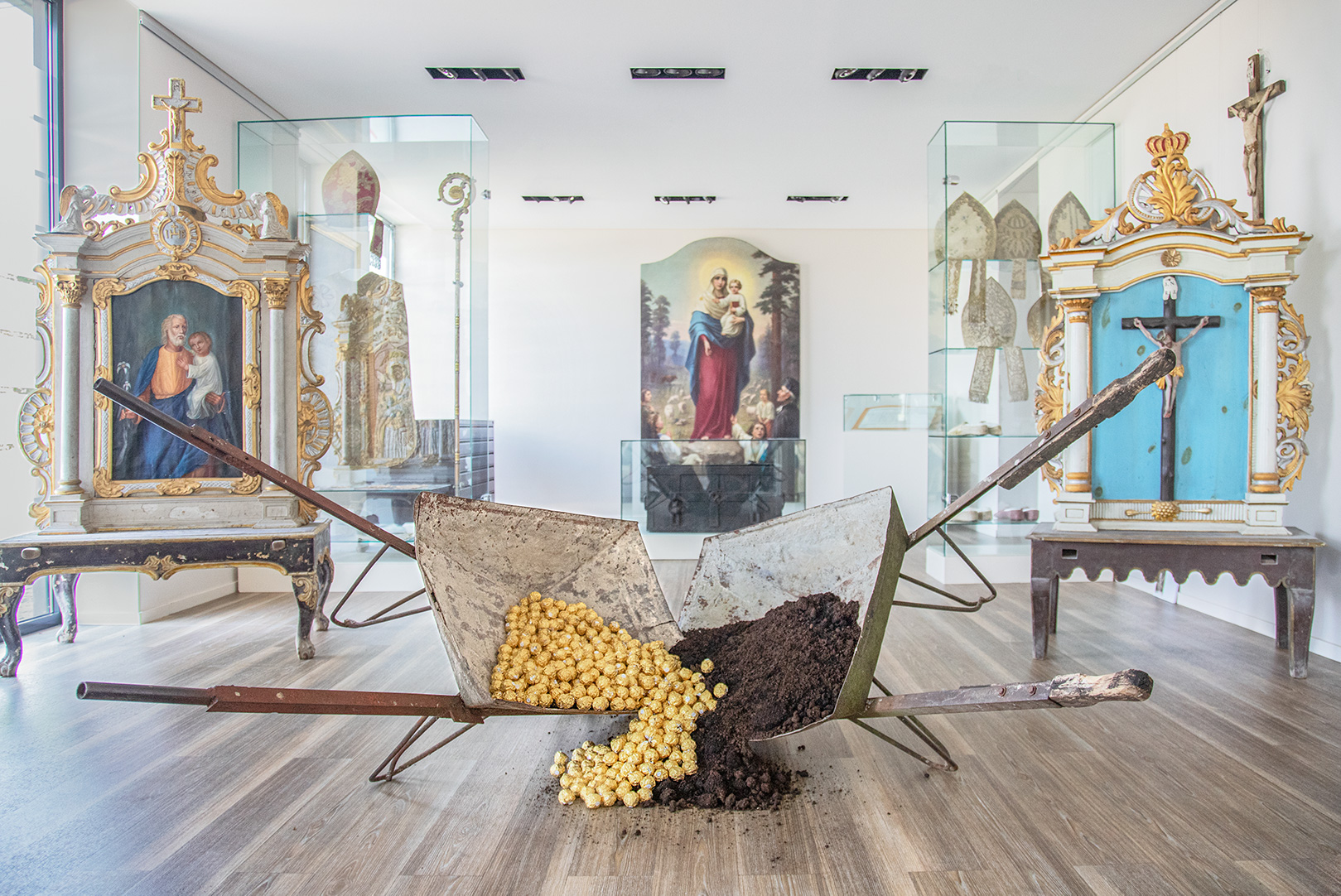 In the installation, one cart spills sand while the other spills chocolate wrapped in gold foil paper. Sand is noted as an abundant and low cost material/waste; chocolate is associated with the notions of luxury, passion, and colonial history. The chocolate balls symbolize the peak of capitalism; the sand represents the base of a capitalistic pyramid. The forced merger of materials demonstrates a conflict of interest; gold and dirt; have and have not; rich and poor. The title “Sweet Nothing” is a misspelling of the idiom “sweet nothings,” which connotes tender words exchanged by lovers. The work can be read as a tragic split, where one party is full of passion while the other is emotionally detached. 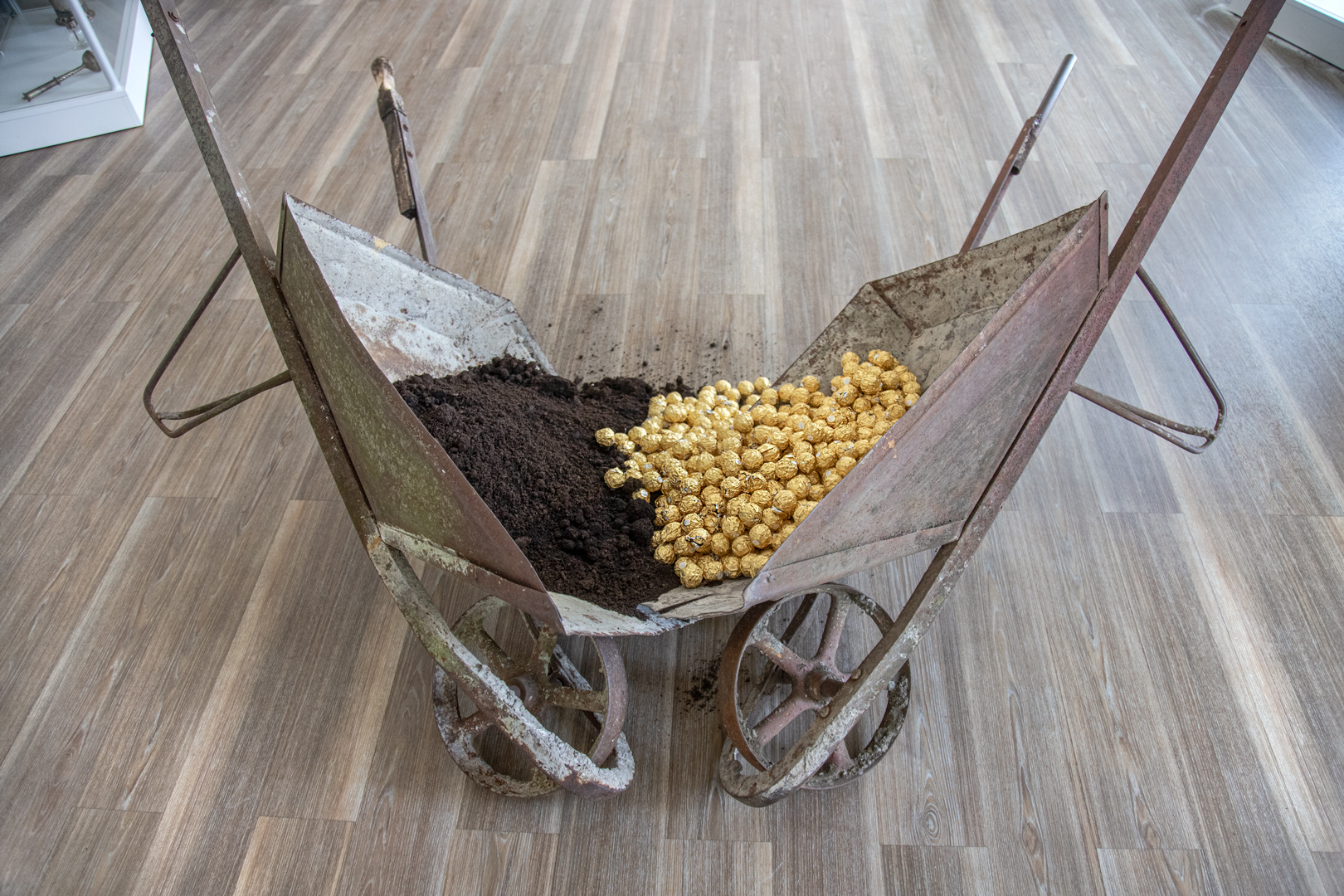 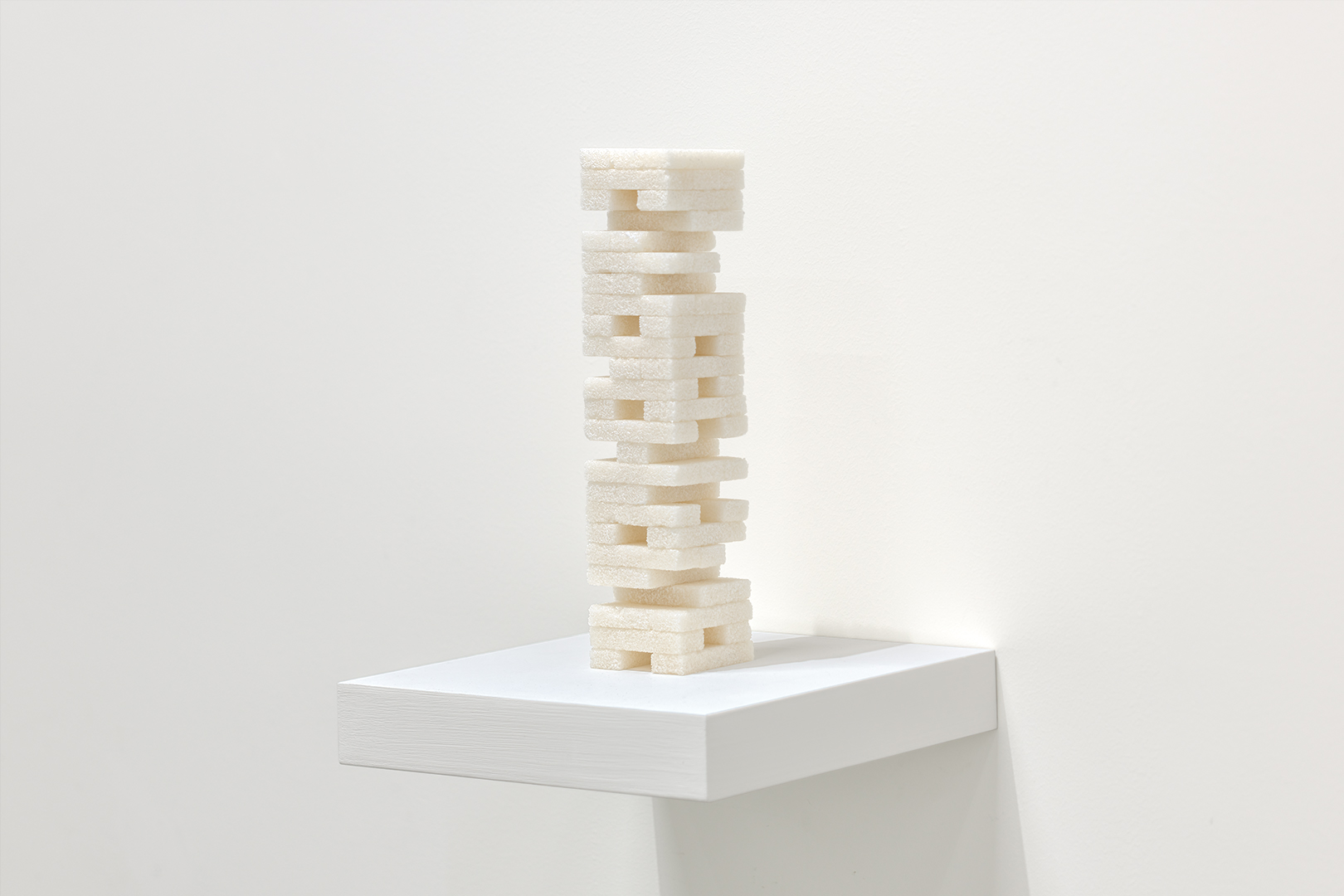 Appropriating the classic game of Jenga, the work consists of fifty-four blocks made of white sugar on a pedestal. The work manifests the excitement and risk of stacking blocks to an increasing height against an unstable base. The work is an analogy to the reckless pursuit of monetary gains in the greater fool theory, where the person buying the overpriced asset later on, for a higher price, is deemed the greater fool. The ephemeral nature of sugar points to a future collapse of the structure by insects or heat. The protruding pedestal adds to the suspension and potential fall. The all white appearance of the work makes it ghostly against the exhibition wall, it is as if the work exists halfway between the physical and the ether. 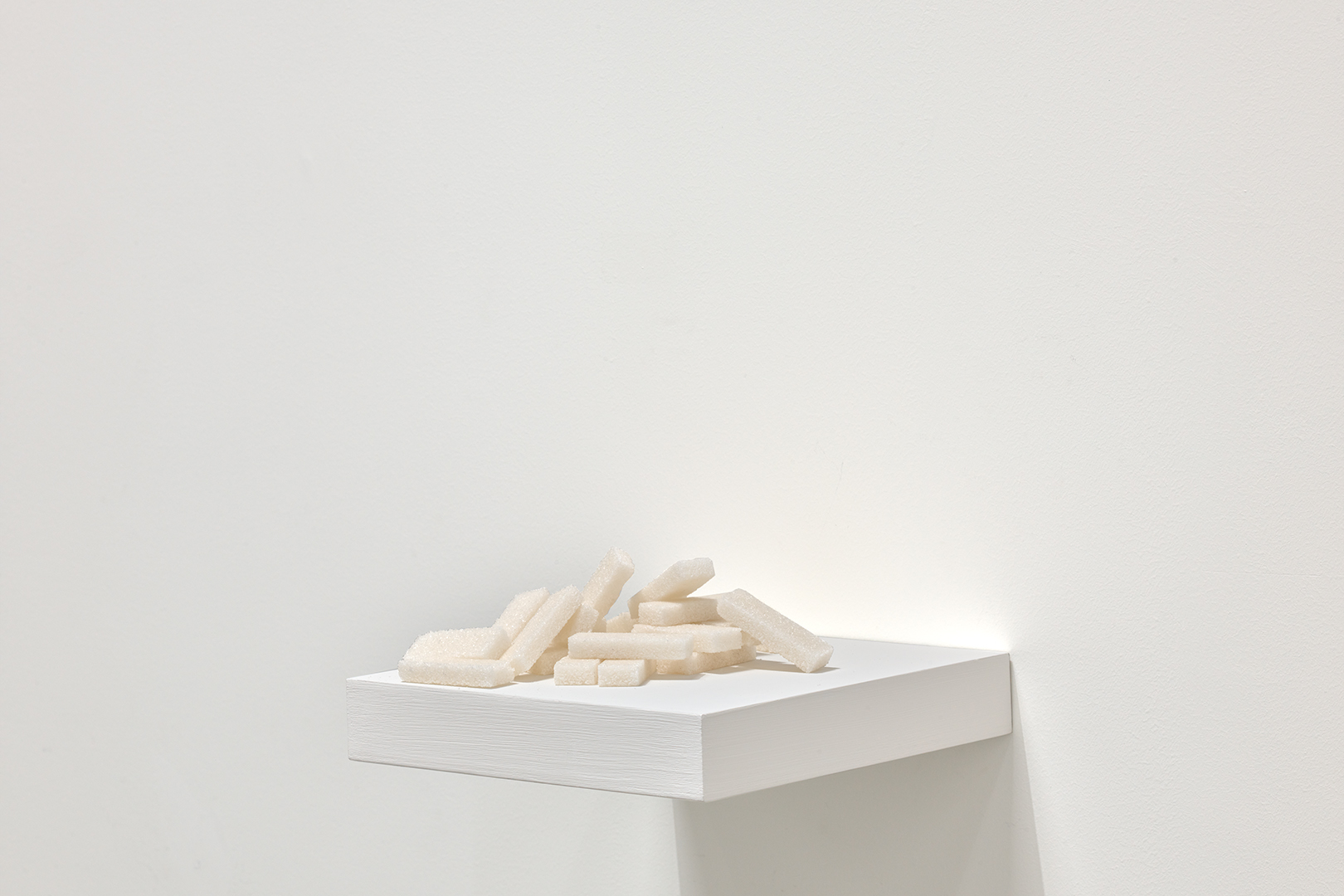